Mysteries of the Moon on Feb. 4th

“Mysteries of the Moon”

a 60-minute documentary, will be accompanied by pizza, salad, soft drinks, and a break for questions and second helpings. 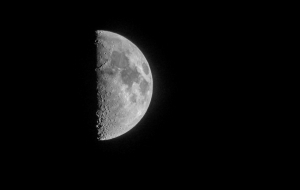 Film details:   A look at the Moon and the role it has played in the history of mankind  – once worshiped as a god; used as a timekeeper by farmers; a beacon for sailors at sea; and how it affects ocean tides and the behavior of animals. Also discussed – the transient lunar phenomenon which has baffled scientists for centuries. Sounds very cool!

Catskill Astronomy Club members John Kocijanski and Jim McKeegan on hand to answer questions and lead a lunar viewing session after the film on the sidewalk!

PHOTO CREDIT: John Kocijanski     PHOTO TITLE: “A Few Hours Past First Quarter”.  The moon was just past the first quarter that occurred before the Supermoon on November 14, 2016.  The image was taken through an eyepiece in a 4.5 inch reflecting telescope using a point and shoot camera.